DCS JF-17 by Deka Ironwork
Fixed RWR new emitter warning sound (only play once when a new emitter appears)
Fixed SMS program change
Fixed MFCD page not saving in NAV master mode
Fixed weapon rdy state mismatch between HUD/MFCD SMS
Fixed gun will be unarmed when the master arm is turned off
Fixed gun cannot be armed when the master arm is off
Fixed gun jam and gun feed count after rearm/repair
Fixed AAP: WMMC2 provides nav computer power, TRAIN includes NAV
Fixed AAP OFF: need to push and hold for 2.0 seconds to turn off all systems
Fixed WMD7/SPJ power supply
Fixed HUD power supply
Fixed Master Caution Reset btn logic
Fixed GBU for JTAC and WMD7 LSS
Fixed WMD7 control. Once changing from CCIP to CCRP, WMD7 camera can be controlled again
Fixed campaign bugs
Modified. Weapons will be directly armed and aligned, if aircraft starts on runway or in air
Modified. SPJ pod will be directly ready (STBY mode), if mounted and aircraft starts on the runway or in the air
Modified. WMD7 will be directly ready (skip BIT but still needs OFF->ON then uncage in POD page), if mounted and aircraft starts on the runway runway or in the air
Modified. DTC will be installed and loaded if the aircraft starts from the runway
You can now place/remove chocks when the engine is idle
Adjusted the VR init position (change x to 0, eye points are moved backward)
Add keybinding for OESP program switch (next/prev)

C-101 by AVIODEV
Added pitch trim sound when using airbrake.
Both EB and CC pitch trim control systems were reworked:
- Pitch trim indicator light (located on the Emergency Trim Panel) now is ON when the stabilizer actuactor was energized by the signals sum from either main, emergency or airbrake compensating trim systems. The signal is determined as a concurrent sum from both cockpits and can be zero (the light will be OFF) if the resulting sum of commands is zero.
Twilight cockpit light issue solved. Now cockpit lights are on or off on hot start based on solar altitude (sun zenith angle) instead of day hour.
Several external model, textures and liveries updates, including PBR.
Added kneeboard to external pilot. (Known bug: kneeboard is now visible in cockpit view when pilot is not present. Will be fixed in next version).
Updated bump of shoulder patches of external pilot model.
Added normal bump to GPU.

DCS AJS-37 Viggen
Fixed issue where RAT-generator would retract on no weight on wheels instead of gear up.
Fixed duplicate Restart mapping.
Fixed ctd when pressing IRRBFRAMSTEGN (missile step) or IR-SNABBVAL (fast select) when not carrying sidewinders. Also fixed issue when turning off IRRBFRAMSTEGN it would perform another missile-step.
Integrated custom bomb ballistics solver.
Fixed issue where air density was hardcoded but should be calibrated by groundcrew.
Fixed animation of magnetic declination knob.

C-101 by AVIODEV
Kneeboard is now not visible in the internal view when the pilot is not present.
Moving the front cockpit air diffuser will not hide/show the control stick.
Updated Caucasus cold start QS mission. (Replaced AI C-130 by Yak-52 since it was too large for the parking positions at that airport).

Last month we spent a lot of time on AIM-120 missile CFD research, in addition to our previous computation (which was primarily aimed at deriving accurate zero-lift drag).

We have obtained many other aerodynamic parameters such as pitching moment and normal force coefficients, damping moments etc. To ensure realistic maneuverability, plausible control and stability characteristics we performed more than 200 virtual wind tunnel tests at different control fin deflections and various Mach numbers and angles of attack. Below you can see screenshots from our software with computation result visualization. 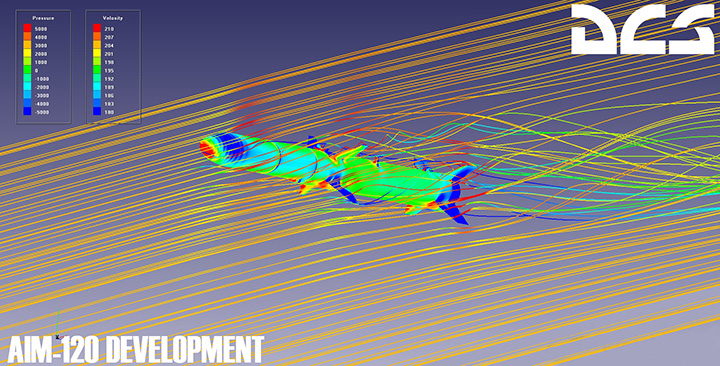 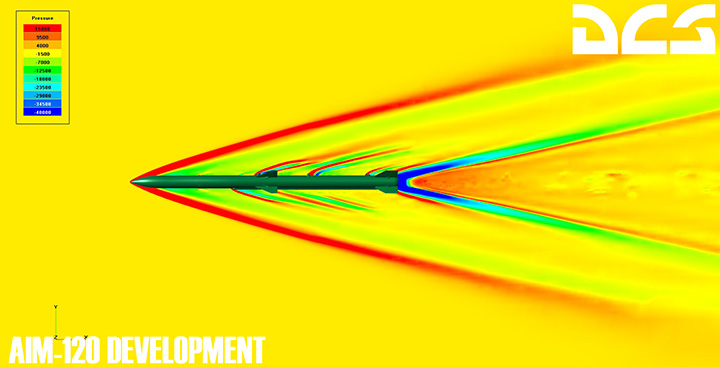 Flight dynamics for AMRAAM are almost done and we will move on to autopilot development.

I've done a lot of tests in SP since the last AIM-120 update and find that the missile now reliably gets a kill usually in one shot. If you use the TWS radar mode and keep both targets in soft lock until ATC is achieved, then you have a high probability of getting a one-shot kill. The AMRAAM is fully capable of making a 180 degree turn onto target and if sufficient energy remain, will still achieve intercept.

I stand corrected. I'm just now re-running those AIM-120 BVR tests using TWS mode and the AMRAAMs miss their targets!! The soft lock does not work.

I'll conduct the next test using the old STT method and see what happens.

That made all the difference in the world. Stay in RWS, soft lock both raw hits with one depress of the TDC with the cursor over each brick in turn (Mode 4 IFF), then wait until they are within the 40nm range band on your radar scope. TDC depress again on the lead hit, or use your AACQ command with cursor over the hit to lock it into STT. Fire at 25 nm range and again at 20nm if you want some insurance. (Note: The MiG-29S armed with R-27R will normally launch between 27-25 nm = 50 second to impact). Track until D-30 seconds from the time you got a launch warning then go evasive 45 degrees left/right and 45 degrees down. Keep counting until D-40 seconds and reverse left/right 45 degrees back toward your target, keeping the radar locked on the entire time. Undesignate, switch to AACQ and acquire and lock the wingman and fire immediately, then go evasive again while keeping that missile locked on. Double kill every time!!

The previous problems with missing targets that were hard locked STT while in RWS mode were all related to internet lag.
_________________

DCS C-101 Aviojet by AvioDev
Seat movement sound correctly stops now when reaching max position, if moving it from one end to the other
Adjusted reset speed of accelerometer needles according to real behaviour
Implemented safety pin of canopy fracturing handle
Modified fracturing handle
Ejection mode selection lever is now functional: by default, it ejects instructor and then pilot, but can be switched off to allow for independent ejection
Fixed ejection pin state initialization at cold start
Both ejection seat handle pin and canopy fracturing handle pin store now in their corresponding compartment, map box or soft Velcro case
Fixed erroneous cabin pressure value at altitude. Behaviour for large differences of pressure is also modified
1020 Hz radio test tone is heard now again
Fixed external lights initialization
Added Ejection Seat Priority Lever ON/OFF control input
Clickable cockpit is now conforming to DCS standards. Both C-101 EB and C-101CC
Corrected Generator OFF position when using control input, it now correctly sets to OFF
Solved longitudinal stability problems. The airplane now behaves correctly in flight (good stability) and during takeoff and landing. No more issues with nose down tendency after landing and nose up "jumping" after takeoff
Left console interior red light in the rear cockpit does not deploy the emergency gear extension handle any more
Fixed emergency fuel korry button light that was not illuminating when pressed
Fixed C-101CC trim. It now has a correct range of +6.5 and -2.0
Landing lights will now be in taxi position when starting on runway
Dimmers brightness decreases now when rotating clockwise, when rotated completely the light will go off
Removed Mk-84 from the C-101CC inventory and removed BR-500 from center pylons, those weapons exceed the maximum authorized weight that may be carried by the underwing pylons

Radar HOTAS "TDC CENTER" changed to "TDC DEPRESS (Lock Target)". Its unique function is to lock AA targets
Radar HOTAS "STT/TWS Toggle (Target Lock)" changed to "STT/TWS Toggle"
With a locked AA target: toggles between STT/TWS tracking modes (same as before)
With the radar on SCAN and no locked AA target, it selects the default lock mode for AA targets: STT or TWS. The default lock mode can be overridden by the toggle switch but upon target unlock will go back to its default
Guns default firing mode: TOT and PAR either in AA or CAS. Mode will reset to default when deselecting the weapon
Rockets default firing mode: TOT. Mode will reset to default when deselecting the weapon
S530D Salvo mode is disabled
Default switches position when starting in the air:
Radar Altimeter is active (Switches in M and H respectively)
Radar is on EM mode
DDM is OFF (if it is mounted)
DDM (IR Missile detector) is now unmounted and OFF by default
FBW "too slow" sound logic updated
AP "Gong" Sound logic updated
AP Roll limit updated
AP Track Index behavior fixed
Display Changes:

S530D SVI Brackets have been deleted. They do not exist in the M-2000C
S530D G and D are now circled all the time. They indicate that the missile seeker head is locked on the target
Radar TDC is now available in SIL and EM modes
TWS/STT (PID/PIC) lock mode legend is now visible at all times in both SIL and EM modes. It indicates the radar default lock mode (with no locked target) or the current target lock mode
CCRP Target cross "+" has been deleted. This is a M-2000D feature only

DCS Fw 190D-9 by ED
W.Gr.21 rockets were remade as separate models so they could be ripped off while hitting the ground

DCS L-39 Albatros by ED
In the case when the aircraft is controlled by a player in the back seat and is thrown out of the server for some reason, control passes to the first player