Sorties on 8/9 December (depending on timezone you are in)

Sorties on 8/9 December (depending on timezone you are in)

Just reviewed the tracks and Tacview from our two sorties today. For sortie one White flight got a number of hits in the T1 tunnel. Unfortunately Green flight was less accurate in their attack in Tunnel T2. (note: Green 3 data did not appear in the replay so Green 3 plane and attack on T2 was not captured).

In the second sortie Green flight achieved bomb hits on and around the southern ramp of the twin bridges with Green 3 hitting the ramp. White flight bombs dropped both short and long.

Following the bridge attack, Alpine achieved a maneuver kill on a MiG and Kooka was hit by ground fire after diving below 10K due to oxygen depletion. Unfortunately, the location where Kooka pulled out of his dive was directly over a couple of ZU23 AAA sited in the mountains at about 4000 feet ASL. One of the AAA units got a few hits on Kooka as he exited their defensive zone.

ps, for some unknown reason sometimes the replay data does not pick up all aircraft involved - hence the lack of Green 3 in Sortie 1. Must be a DCS bug.

I'm running the replay right now so I'm hoping for a full capture of all aircraft. Green Three did not show up in our last mission a week ago, hence the lack of a kill verification image from Tacview. My aircraft also did a swan dive mid-mission and just seemed to slow down and crash so I'm hoping that I get a better result this week.

I usually disengage the Tacview record function while flying to pick up those extra 10 fps that smooth out the video and then capture the Tacview data the following day via a replay. Takes time (three plus hour missions become 6-7 hours total).

I have the damage assessments processed, and I think Green Flight did a lot better on T-2 than your data might show. I'm seeing two closely concentrated HVAR impact patterns right on top of the tunnel abutments and total collapse of the tunnel while the third impacts from HVAR fire are strung out on the South West side of the tracks maybe half a mile from the tunnel entrance. T-1 tunnel also collapsed while the rail line north of the double-span bridge was hit by at least four M-64s leaving a very big crater deep into the rail bed.

All in all a very good result, except that the bridge was left intact (personally, my rocket and bombing techniques sucked!!). I think our commie friends will have the tunnel abutments fixed in a weeks time so it might be a good mission package next week to come back and finish off the other tunnels in the area and take another crack at those two bridges north/south of T-1 and T-2.

I'll have the op log up in a couple of hours once I finish replaying the track and analyzing the data.

Good job guys (and congrates to Alpine - I'm hoping to get an image of that and will post it as well.) I'll update our pilot stats once the op log is done (still need to update from last week as well). I'm just glad it wasn't me doing the pancake into the ground as when I tried to pull around on that MiG at .93 Mach my Sabre did an instant nose-dive and it was a bitch to handle until I slowed down (by then Alpine had things in hand!!) Just have to force myself to remember not to firewall the throttle every time I'm going into a merge, it just doesn't lead to good results.

Re Tacview - I do the same. OFF while flying and then ON for the Replay.

It is interesting that some planes do not show up in the my Replay track. I think it might have something to do with when I spawn in and when others spawn in. On yesterday's mission Green 3 was missing for the first sortie but then appeared in the second sortie after Wolverine collided when I respawned in a new plane near where Wolverine had parked after the first sortie (not that you can see where he parked as he was invisible in the replay - just see my plane exploding). When we then both re-spawned in suddenly Wolverine is now visible - albeit that after he loaded weapons there appears that his plane has on both rockets and bombs. When he taxied out a duplicate (ghost) of his rocket equipped plane remains in his spawn position. Ghosts of Kooka's and Speed's planes also remained parked on the apron.

Just some of the bugs in the DCS track software.

I just downloaded the updated version this week and while I have yet to see any ghost images, I had the same experience with Wolverine's plane. It didn't show up at all in the first sortie after he exited and came back in after fixing a control issue. Then on the second sortie when we all re-spawned our aircraft, his appeared and was present throughout. And it's not just related to one aircraft as weird things seem to happen from time to time, like a few weeks ago I was staring in disbelief at a MiG-15 that climbed up from somewhere between Sukhumi and Gutauta and joined in formation with Green Flight, then I realized that this was StiC flying his F-86.

Sometimes a little creative interpretation has to occur to get through and interpret these Tracview tracks. It's not uncommon at all for the software to switch names, so when I see a buy from 39th flying side by side with Green Three, I know it's Kooka or StiC or someone else just by the position of their aircraft.

I don't think all the blame lies with Tacview either. The DCS replay function is a bug's nest of weird and wonderful computer imagination.

Alpine in foreground. The crash site of his MiG kill in the hillside directly ahead. 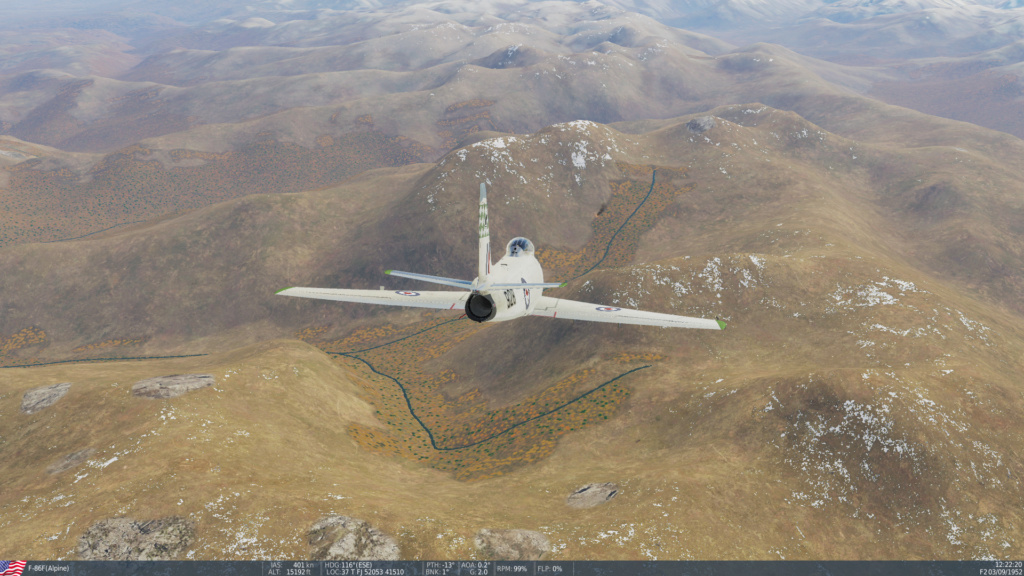 Gunsight image of the two 39th Squadron Sabres that were following White flight. 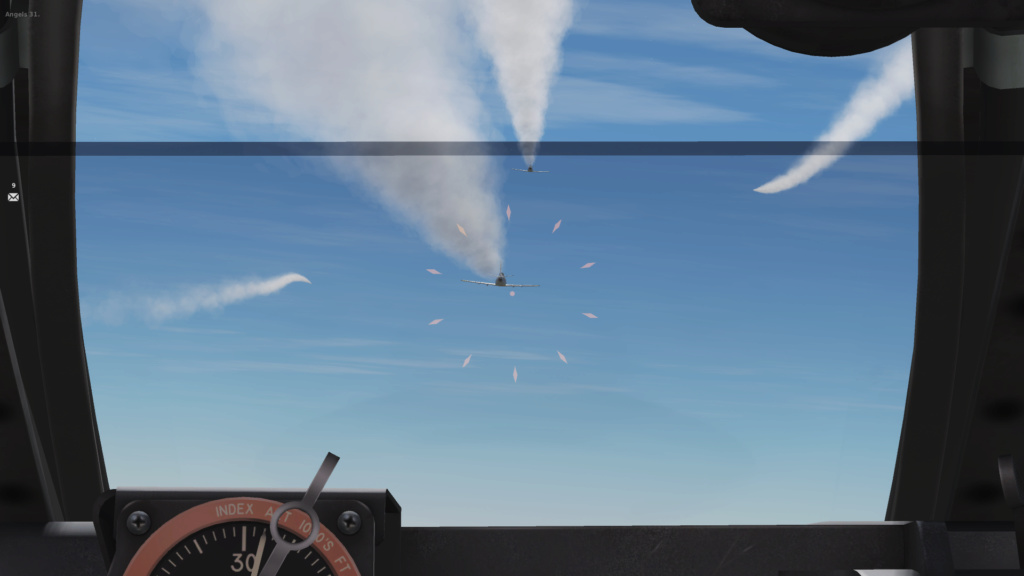 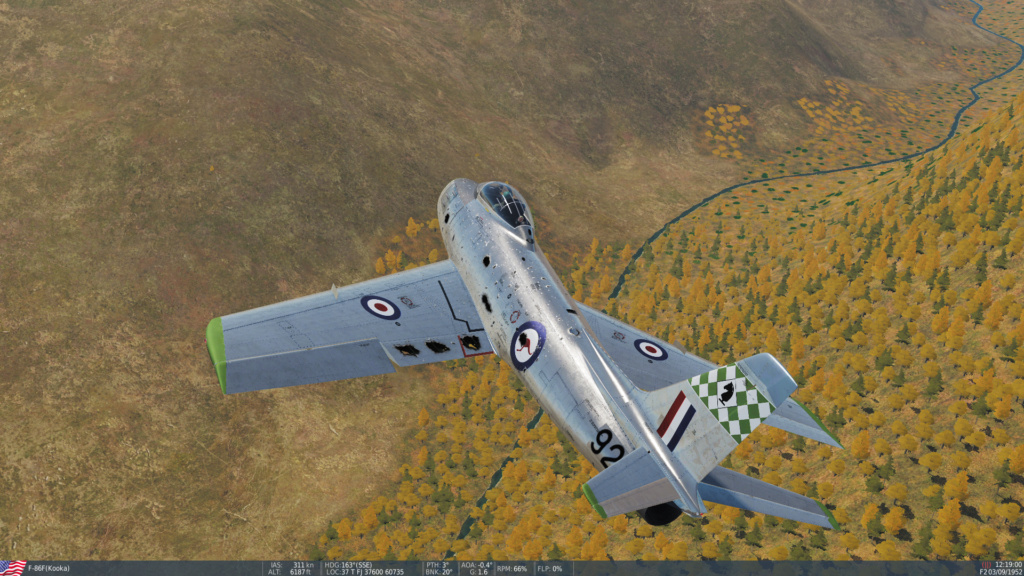