I just purchased a copy of High Blue Battle from Amazon.ca.

Should be good hopefully! Does anyone else have a copy of this? 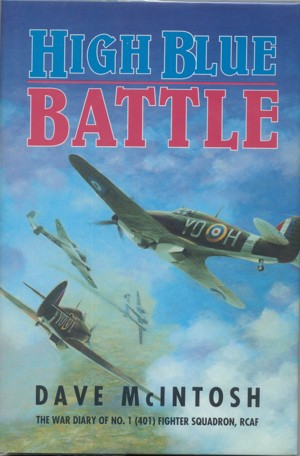 Nope, don't have that one but I do have a selection from various others including:

BoB A Day to Day Chronicle 10 Jul - 31 Oct 1940 by Patrick Bishop (very good reference and I use it alot for my scenarios)
BoB Five Months that Changed History by James Holland (best detail on the leadup, limited on the actual BoB)
Fighter Boys Saving Britain 1940 by Patrick Bishop (good read, mostly about the pilots)
Their Finest Hour Story of the BoB 1940 by Edward Bishop
The Most Dangerous Enemy by Stephen Bungay (best book overall, deals with many aspects of air combat/phychology of decisions)
The Blitz by Juliet Gardiner (haven't read this one yet but it looks real good on the coffee table)
The Spitfire pocket manual (great little reference work from the original)
The Spitfire Story (lots on the development and variants, not much on the BoB)

BoB by Nigel Cawthorne,The Blitz on Britain by James Alexander,The most Dangerous Enemy by Stephen Bungay.It's handy when the wife works for a publishing company.
_________________

Received the book yesterday and it's pretty good. Covers the entire war from 1939 with the Squadron located in Alberta, until 1945. There's a decent introduction that covers the history of the squadron and then the bulk of the book is just very short (sometimes longer) log entries from the Squadron diary. Some of them include great info.

Apparently the squadron pub near Croydon was called "The Orchard".

Some great stuff in there about when the King visited the squadron and when A.C.M Dowding visited them at Middle Wallop and said they'd get new version Hurricanes to replace the ones brought from Canada.

One of the Hurricanes that they took to England, ostensibly for battle, was a restored static display Hurricane from the C.N.E!

They had a Squadron dog that was trained to bark once each claim for the day.

Lots of other tidbits. A few photos I hadn't seen before, but not many photos in all (about 16 photos in all). The photos put names to the faces, however which is good.

I would say it's a definite must-have for any member of this group! Great stuff in there for mission planners too. It's not incredibly detailed, but it has some specifics related to 401's actions in each day of combat. It specifically notes the sorties that 401 took part in that I haven't seen listed anywhere else online.