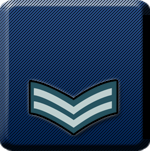 Couple of points jump out at me right away. All the text that I've read on the Spit talks about the wing load feedback that gave a pilot advance warning of a stall. It exists in CoD and if you are used to flying a Spit, you learn to recognize the on set of a stall just in time to prevent it. That feature does not exist in the Hurricane with it's thicker and more ridged wing so when a Hurri or 109 goes into a stall, it happens instantly. The 109 also has a higher stall speed than either the Hurri or Spit as I learned on my first landing approach when it dropped like a stone as I slowed to sub 100 mph speeds (flaps were down and all). Now in CoD, I have never yet been able to out turn a 109. I have put the Hurri and a very tight bank on the verge of stall and they still get me every time. Spit has superior roll rate, Hurri rolls over like a fat woman on a water bed.

Firepower, that's a no brainer, the 109 has greater firepower, however the cannon had a much higher arcing trajectory than the MGs and so getting both to converge meant that the MGs had to be set at very short range, ergo if the 109 is close onto your tail, the cannon will likely be firing too high. I also recall that the cannon causes the plane to lurch about making aiming difficult. That was the key reason that the Brits stuck with the .303 (at least initially) as the heavier recoil of cannon fire (they even considered the .50 Cal but rejected it) would effect aiming and the intent of the Spit and Hurri was to deliver concentrated fire on a bomber for 2.5 seconds which was consider sufficient to bring a bomber down (until the Germans began to add armour plate).

Speed, this is the one feature that I just do not get. Everything I have ever read about the Spit states that in a flat run at 12 to 15 thousand feet, it can hit 350 plus MPH, yet in CoD they are talking about slowing it down 60 MPH when it can hardly get up to 300 MPH. I only get 350 out of one of these in a dive.

Climb rate. The data all points to even performance between Spit and 109 in a climb with the 109 having a slight advantage do to a better power/weight ratio. However, in CoD the 109 is like a GD rocket and just goes straight up. Last night was another perfect example. Four or five Spitfires all doing initially 250 to 300 MPH chasing that 109 around Manston and yet this guy simply pulled straight up and zoomed into the clouds. I pulled out when my Mk 1a dropped to under 100 MPH and was on the verge of a stall/spin. Something is definately amiss in the 109 FMs.

Ability to maintain a man doo, well the Spitfire is the clear winner with that nice bubble canopy.

The Spitfire will turn inside the 109 quite handily at high speeds and at altitudes above 10,000ft or so. At least in CloD.

Recent AARs have supported the idea that the 109 can be effectively combated with a combination of altitude and wingman tactics.

I am sure 1C has never seen this video..

Toxic wrote:I am sure 1C has never seen this video..

Now as we've all seen in CoD the 109 shoots up like a rocket out to space.